Are Artificial Sweeteners Safe For Your Children?

You're mindful of what your child eats or drinks, but do you really know what they're putting in their bodies? Studies by NHANES over the last 40 years tracked childhood obesity as it steadily increased before plateauing at 20% in 2008. Many attribute the changes to a national focus on the importance of low-calorie, low-sugar foods. You grew up on foods that contained sucrose, the gold standard of sugar derived from cane or beets, but nowadays children are consuming foods with sugar substitutes such as aspartame and sucralose. As with any new product, there is little in the way of research on associated long-term health effects. How sure are you that these foods are safe for your developing children? 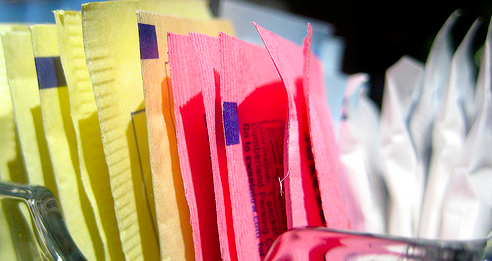 Not all sugar is created equal. Low calorie sweeteners (LCS) are not a novel concept: sugar of lead was first used by the ancient Romans, often causing lead poisoning in chronic users. The sugar substitute cyclamate, banned by FDA for it's association with bladder cancer in rats, is still used today in countries such as the UK and Russia. Today, the most commonly used sugar substitutes include the expensive natural sugar substitute Stevia (Truvia®) and those colorful packets of sugar substitutes-aspartame (Equal®), saccharin (Sweet'N Low®) and sucralose (Splenda®).

Sucralose (Splenda®), the top-selling sugar substitute found in many sodas and foods, has been deemed safe for human consumption, from conception to old age. Since the majority of the molecule is not broken down or absorbed by the body, it is considered calorie-free. In the laboratory, studies on toxicity in rats failed to show any increased cancer risk even at the equivalent of 100 pounds of sucralose consumed daily throughout a lifetime. Long-term clinical studies have shown that human adult consumption of up to 1000 mg (~25 diet sodas) per day for up to 6 months did not lead to abnormal blood work or adverse clinical effects. Similar findings exist for the other sweeteners.

As adults consume more of these sugar substitutes, they are making their way into the lives of children and adolescents. What research has been conducted on their behalf?

Several studies have explored the relationship between consumption of artificial sweeteners and weight changes in children, but results are conflicting. A major obstacle in these investigations involves controlling for genetic, cultural and environmental parameters. In all, they seem to suggest that when children consume sugar-free foods, many will actually GAIN weight. How could this be? Other studies explore this question, and investigators believe that children compensate for the low-calorie meals and beverages by eating more to make up for the "missing calories." This is not unreasonable, since the same phenomenon has been observed with fat-free diets in adults.

Due to all this speculation and lack of conclusive research, and partly because artificial sweeteners tend to displace milk and 100% juice at mealtimes, the official position of the American Academy of Pediatrics is that foods and beverages containing LCS should not make up a significant part of a child's diet.

The medical community clearly needs to perform more studies on LCS consumption in children, including long-term health consequences and weight management effectiveness, as more of these mystery products find their way into your home.