The New Electrolarynx For Intubated Patients

The New England Journal of Medicine (NEJM) recently published an exciting article showcasing some breakthrough technology: physicians successfully used a device called an electrolarynx, allowing an intubated patient to communicate with his providers and family members. If you've ever had to witness a loved one in a setting where they were intubated, you know how frustrating it can be for the patient, family and staff.  This new technology will be extremely helpful in intensive are unit (ICU) settings where doctors can change their treatment regimens based on feedback from the patient, improving care tremendously. The patient and device (white arrow) can be seen below.

On your recent visit to the doctor's office, you had the pleasure of getting stuck with a needle and drained of a few small tubes of your blood. You were left with a painful memory, a small bruise at the site of injection and a printout of the results. You spend a few seconds looking through the words and values before giving up, but wouldn't it be helpful if you really knew what all of those numbers meant? 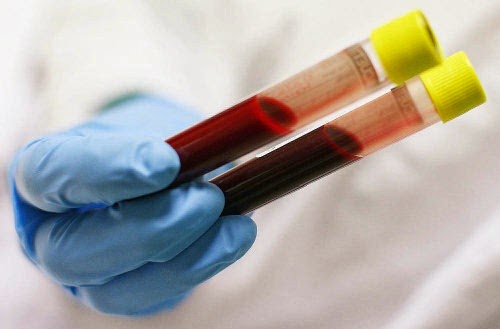 The laboratory blood test is one of the most useful diagnostic tools of the modern physician. It allows the provider to peer inside the body like a mechanic checks under the hood. There are many blood tests available, from single tests on proteins to "panels" containing several different measurements. Two commonly ordered panels are the complete blood count (CBC) and the comprehensive metabolic panel (CMP).

CBC
Our blood is made up primarily of red blood cells (RBC) and white blood cells (WBC). The RBCs carry nutrients through the body, while the WBCs protect us either by filling holes (platelets) or by attacking and killing whatever looks suspicious (leukocytes). The colors are red and white because, simply, when you spin the blood around very fast, these cells separate based on weight and reveal red-colored and white colored fluids. The CBC is performed by a machine that lines the blood cells up in a single row and counts how many are present in a set amount (microliter) of blood.

WBC. An increase in WBC typically suggests that our body is training an army to kill an infection. This can also be elevated in cases of cancer or with the administration of steroid medications. The specific types of WBCs (neutrophils, eosinophils, basophils, monocytes or  lymphocytes) help give insight as to what type of infection may be present (for example, neutrophils are released acutely for bacterial infections). Decreases in WBCs are seen most commonly as a side effect of medications such as chemotherapy, antibiotics and anti-seizure drugs. In other cases, a decrease may suggest that something is killing them (infection, alcohol, autoimmune, radiation) or that there is a problem within the factory that produces them (the bone marrow).

RBC and Hemoglobin. The primary role of the RBC is to carry oxygen, using hemoglobin, to cells so they can use it to make energy. When RBCs are decreased, it is known as anemia. This can be caused by iron (holds on to oxygen) deficiency, blood loss from chronic diseases, genetic diseases such as sickle cell anemia, significant bleeding or a problem with the factory that produces RBCs (the bone marrow). Increased RBCs can be seen in cases of dehydration, chronic breathing problems (COPD) and some cancers of the bone marrow.

Hematocrit. This is simply the ratio of red to white fluid when the blood is spun around very fast in a centrifuge. Normally, 46% of blood is RBCs. If this number is low, it's an anemia.

MCV. This is the size of the RBC, much like measuring the square footage of a house. Increased MCV is seen with alcoholism, vitamin deficiency (B12 and/or folate) and a stomach disorder called pernicious anemia. Decreased MCV suggests one of the anemias described above.

MCH and MCHC. These measure the amount of hemoglobin per RBC, helping the physician narrow down the type of anemia present. MCHC is decreased in the anemias described above, and elevated in some genetic diseases.

RDW. This compares the RBCs to one another. If there is a large discrepancy between them, meaning some are very large and others are very small, this number will be high. The most common cause of this is iron deficiency anemia.

Platelets. Platelets are very important because they plug holes and cracks to stop bleeding. Low platelets are dangerous because it increases the risk of bleeding, whether out of a wound or into body cavities like the head or digestive system. High platelets are also dangerous because they cause over-clotting, which can lead to obstruction of blood vessels and thus problems like stroke and heart attack. Platelets are often kept intentionally low with medication (such as aspirin) to reduce the risk of stroke and heart attack. Many rare diseases and some cancers can also cause low platelet counts.